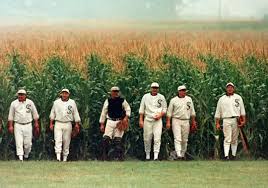 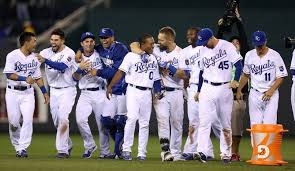 Dearies, just when we are afraid to turn on the TV for fear of seeing the details of another ISIS slaughter of the innocents, children dying from starvation, dying Ebola patients around the World and polar bears clinging to rapidly melting glaciers… The Boys of October emerge onto the field. 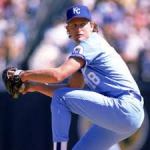 We have always loved the underdog. In many ways I have become a patron saint of lost causes. Not that they have been a lost cause. No, the Kansas City Royals have been evolving – a work in progress. From their inception as the Kansas City Athletics in 1955 – 1967 (and a less than stellar record) to their current incarnation as the Royals,  there has been a long painful drought since Hall of Famer George Brett and Bret Saberhagen led the Royals to their first World Series win in 1985. 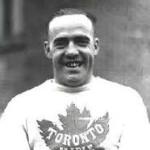 I once spent an evening with the late Conn Smythe and King Clancy, driving them home in my little Ford Fiesta (when they were still made in Germany). We were returning from the Peach Kings Annual Dinner one night in 1979. The Peach Kings are the Toronto Maple Leafs Farm Team. Colonel Smythe had dismissed his chauffeur for the evening and yours truly was doing the driving.

The Colonel, after whom the Smythe Division is named,  bought the St. Pats team in 1927 and renamed them the Toronto Maple Leafs. He then built that hockey emporium known as Maple Leaf Gardens in 1929. In the name of progress, that historic edifice has recently been torn down.

Conn Smythe loved horses as much as he loved hockey, and he created a small but brilliant racing stable, breeding the exceptional filly Wonder Where and winning Canada’s equivalent to the Kentucky Derby, the Queen’s Plate twice, with Caledon Beau and Jammed Lovely. The Toronto Maple Leafs never lived up to their expectations…

Francis Michael “King” Clancy coached the Toronto Maple Leafs and Ottawa Senators in his heyday, then worked in the front office. The Colonel had been his boss and so had Harold Ballard. Earlier in his career King played for the Ottawa Senators during their 2 Stanley Cup wins in 1923 and 1927. He also coached the Montreal Maroons, whom I presume were named by Bugs Bunny.

That night as we made the hour and a half drive back first to the Smythe farm in the Caledon Hills, then another hour closer to Toronto to drop off King, the two men reminisced about a magical, bygone era. An era where winning was not quite everything. The honor of the Sport and its adherents mattered. Where humour and camaraderie and not much money were the order of the day. Outrageous salaries and bonuses weren’t on the horizon. It was all for the love of the game.

I swear that Ring Lardner was sitting on King Clancy’s shoulder as the stories tumbled out about road trips with the Leafs and Senators, his teammates and run down hotel rooms, loose women and demon rum and so much more.

The reason that we have taken this detour for a moment, to deviate from the subject at hand: The Kansas City Royals making it to the World Series, is because from early childhood I loved sports, all kinds of sports, with a passion. I played many of those sports at school. Was always the most pathetic player on the team, but what was lacking in ability was made up for with enthusiasm.

Became disenchanted with many sports in early adulthood. Clung to Bobby Orr and Ken Dryden as hockey became more violent and playing time was eclipsed by fight time on the ice. Even The Great Gretsky couldn’t bring me back to the fold…

The great Secretariat, Seattle Slew and Affirmed all performed the impossible in the 1970’s – they won horseracing’s Triple Crown. This feat has not been duplicated since. Was in the crowd the day that Seattle Slew romped home in the mud and the next year when Affirmed and teenager Steve Cauthen nosed rival Alydar in one of the greatest finishes in all of sports. Now, the same scourge of baseball – doping – is tarnishing the Sport. There is too much horseracing and too many connections between casinos and racetracks.  I still prefer most horses to most of the humans I know. But I digress…

Grandpa took me to a baseball game in Toronto. I was 5 years old at the time and I fell in love. The team was the old Toronto Maple Leafs. They were a minor league team that played from 1897 until 1967. They were the earlier iteration of the current Toronto Blue Jays.

Little 5 year old me immediately understood the joy of the game of Baseball. It wasn’t long before I started reading Ring Lardner’s immortal “You Know Me Al”, savoring every sweet humorous word of his fictional letters from the road, from a bush league baseball player to a friend. Lardner, who died in 1933, captured that magical bygone era with grace

DEAR FRIEND AL: Well I will be home in a couple of days now but I wanted to write you and let you know how I come out with Comiskey. I signed my contract yesterday afternoon. He is a great old fellow Al and no wonder everybody likes him. He says Young man will you have a drink? But I was to smart and wouldn’t take nothing. He says You was with Terre Haute? I says Yes I was. He says Doyle tells me you were pretty wild. I says Oh no I got good control. He says well do you want to sign? I says Yes if I get my figure. He asks What is my figure and I says three thousand dollars per annum. He says Don’t you want the office furniture too? Then he says I thought you was a young ballplayer and I didn’t know you wanted to buy my park.

We kidded each other back and forth like that a while and then he says You better go out and get the air and come back when you feel better. I says I feel O.K. now and I want to sign a contract because I have got to get back to Bedford. Then he calls the secretary and tells him to make out my contract. He give it to me and it calls for two hundred and fifty a month. He says You know we always have a city serious here in the fall where a fellow picks up a good bunch of money. I hadn’t thought of that so I signed up. My yearly salary will be fifteen hundred dollars besides what the city serious brings me. And that is only for the first year. I will demand three thousand or four thousand dollars next year.

Found that same sweet reverence for the game in Red Smith’s work. Smith, who died in 1982, wrote for the New York Herald Tribune, and finally the New York Times. My hero David Halberstam reviewed a compilation of Red Smith articles called “Red Smith on Baseball” and captures the essence of the man and the game with an early excerpt

The collection is nothing less than Smith at his best. There is Smith on Mickey Mantle’s first big-league game; Smith on the day in August 1950 that Joe DiMaggio was benched by Casey Stengel; Smith, endlessly and joyously, on Stengel himself; Smith on the first color television broadcast, in 1951; Smith on Allie Reynolds’s no-hitter, with Yogi Berra dropping a foul pop from the bat of Ted Williams, the last batter in the game, in September 1951; Smith in 1946 watching Red Barber in a broadcast booth in the days before radio announcers traveled with the team, as Barber transformed a minimalist teletype message, pitch by pitch, into a rich running narrative; Smith on Whitey Ford’s first World Series victory; Smith on Willie Mays’s last game in 1952 before going off to the Army; and Smith on Carl Erskine finally making it to the big league…and more

But ‘nostalgia ain’t what it used to be’, as Yogi Berra said.  We are jolted back to a harsher modern reality with the Pete Rose betting scandal, and the ever-evolving doping scandals involving big names like Alex Rodriguez and others. It drove me away from a game that I loved…

Red Smith, Ring Lardner, Kevin Costner and most of us, know that Baseball is a metaphor for life. Most of us toil away in the trenches, with little recognition or exceptional success. We are the 99%. But once in a very blue moon, we capture the gold ring on that merry-go-round.

As Yogi Berra, the William Shakespeare of Baseball once said, “It Aint Over Til It’s Over” …

From good luck talismans, like South Korean uber-fan SungWoo Lee to revitalized fans like me here in Vancouver Canada, the rest of us down here on earth will be watching too.

Raising a glass of champers to the Kansas City Royals – The Boys of October!